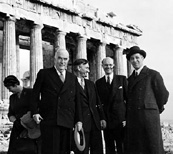 Prime Minister Menzies (second from left) pictured in front of the Parthenon during a visit to Greece in the 1950s.

Image courtesy of the National Library of Australia.

Prime Minister Menzies and Colonel Spry favoured a Royal Commission on Espionage for the following reasons:

Precedent: After the Gouzenko defection in Canada, the Canadian Government had established a Royal Commission which had eventually produced an outstanding report on Soviet espionage in Canada and was extremely highly regarded inside ASIO.

Legal necessity: Under the statue of its establishment ASIO had been given no legal power to require of anyone that they must speak to its officers or answer their questions. By agreement with Menzies, it was clear that the Royal Commissions Act could be amended to give it the power of subpoena.

Public education: That the Royal Commission on Espionage would alert Australians to the reality and danger of Soviet espionage.
Robert Manne, The Petrov Affair, 1987