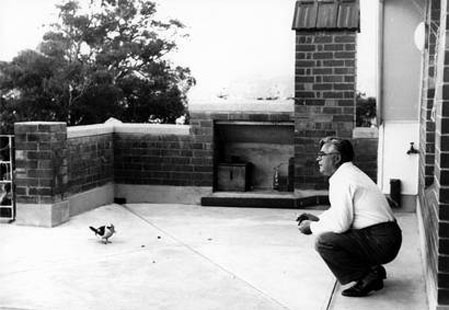 Vladimir Petrov feeding a kookaburra at the ASIO safe house on Sydney’s North Shore following his defection. Image courtesy of the National Archives of Australia.

While carrying out his spying duties, Petrov soon came to the attention of the Australian Security Intelligence Organisation (ASIO), Australia’s recently formed intelligence service. ASIO had been formed in 1949, primarily to investigate what was known as ‘The Case’. The Case concerned leaks of information from the Australian Department of External Affairs to the Soviet Union.

Part-time ASIO agent, doctor, violinist and Polish emigré Michael Bialoguski was an eccentric yet key player in Petrov’s defection. Bialoguski met Petrov at the Russian Social Club in Sydney and the two became friends. Petrov didn’t suspect Bialoguski’s ASIO connection and confided in him about his troubles at the Soviet Embassy. Bialoguski was the first person to alert ASIO to the possibility that Petrov might want to defect.

‘Cabin Candidate‘ was ASIO code for a possible defector. The plan for Petrov’s defection was code named ‘Operation Cabin 12’. ASIO Deputy Director Ron Richards was in charge of the operation. For nearly 6 weeks he negotiated the details of the defection in a series of tense meetings with Petrov.

Richards’ main concern was to secure documents containing evidence of Soviet espionage and infiltration of Australian Government agencies. These documents, which Petrov brought across upon defection, were later labelled as documents A to J.

Vladimir Petrov at the moment of his defection.

On April 3 1954, Vladimir Petrov defected to Australia under top secret conditions. He was taken to a safe house on Sydney’s north shore. Only a few ASIO officers knew of the defection and even his wife, Evdokia, was unaware of her husband’s decision.

Once the Soviet Embassy became aware of Petrov’s defection it accused Australian authorities of kidnapping him. They quickly took Evdokia from her house in Lockyer Street, Griffith and effectively placed her under house arrest at the Soviet Embassy. Two armed couriers from Moscow arrived to escort her back to Russia (and, presumably, punishment and possibly death).

On the morning of 19 April she left the Embassy bound for Sydney’s Mascot Airport and her flight home. Many Australians believed that, as the wife of a Communist defector, Mrs Petrov was being flown back to Russia by force to face certain execution. This feeling was particularly strong amongst Eastern Europeans who had left Communist countries to live in Australia.

Under the floodlights of the airport I saw the milling crowd like a roaring sea around us. I lost my right shoe, and asked my escorts to get it back for me, but they would not stop.

By the time Mrs Petrov arrived at the airport a large, enraged crowd had gathered to ‘save her’. Flanked by her two Russian couriers, Jarkhov and Karpinsky, Mrs Petrov was led to the plane. As she crossed the tarmac the crowd broke through police cordons, rushed forward and surrounded the Russian party. Some grabbed Mrs Petrov’s clothing in an effort to hold her back and in the mayhem she lost one of her shoes. Eventually, she was pulled on board with the assistance of the crew.

ASIO contacted the pilot by radio and Colonel Charles Spry, Director-General of ASIO, made arrangements to approach Mrs Petrov in Darwin so that, if she wished, she could seek asylum in Australia. When the plane landed on the morning of 20 April Mrs Petrov was separated from her couriers and asked if she wished to stay. Mrs Petrov was torn between her own fears and fears for her family in Moscow, but finally she agreed.

On April 13, the eve of the last Parliamentary sitting day before the 1954 election campaign, Prime Minister Robert Menzies announced the defection of Vladimir Petrov. He called for a Royal Commission to investigate evidence of espionage contained in the documents Petrov brought with him.