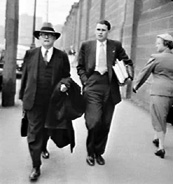 Dr Evatt (left) appears at the Royal commission on Espionage, 1955.

“Personal grievance was rapidly converted to dark suspicions of a conspiracy directed against him.” Robert Manne, The Petrov Affair, 1987 on Evatt’s response to announcement.

“O’Sullivan’s confession to him of the authorship of Document H appears to have broken through some dam which held back the flood waters of his [Evatt’s] paranoia. Politically speaking, this is the turning point of our story. Without Dr Bialoguski there would have been no Petrov defection. Without Dr Evatt there would have been no Petrov Affair.” Robert Manne, The Petrov Affair, 1987

“History will record that the Petrov defection was carefully and cold-bloodedly timed for April solely because an election was to be held the following month.” Dr Evatt, Hansard, 27/10/54

“The Government did not win the election fairly. Throughout the campaign it resorted to the smear and hysteria technique adapted from the police states of Germany and Russia.” Dr. H.V.Evatt, 1954

The most fundamental and enduring element of the conspiracy theory is the allegation that Menzies, with the assistance of ASIO, consciously manipulated the Petrovs’ defections for the purpose of election victory.” Leader of the Opposition, Herbert Vere Evatt, was often referred to as ‘Doc’ Evatt.

Document J is one of the most debated and dissected documents in Australian history. It was written by Rupert Lockwood a prominent Australia Communist for the Russians whom he regarded as allies in the battle against Fascism. Lockwood argued that the Petrov Affair was part of a plot to defeat Communism. ASIO believed it was little more than Communist propaganda. Evatt believed it contained proof of conspiracy. Page 35 named three of Evatt’s staff as sources of information: Fergan O’Sullivan, Albert Grundeman and Allan Dalziel.

Evatt claimed page 35 had been added to Document J in order to damage the Labor Party. He went to great pains to prove it, scrutinising the document for inconsistencies in handwriting and even staple marks. The Commission concluded Document J was entirely Lockwood’s work. Evatt remained convinced parts had been forged.

The Petrov Document labelled ’H’ was written by Press Secretary to Dr Evatt, Fergan O’Sullivan. It is a series of pen-sketches of the 1952 Press Gallery. Fergan O’Sullivan claimed to have written Document H to help the Soviet Union target journalists who might publish pro-Soviet articles. In fact Moscow used the information in an effort to identify potential agents. No one named in Document H was found to be a Russian spy.