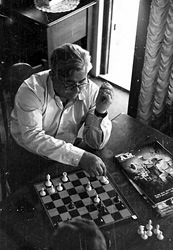 Vladimir Petrov playing chess inside the safe house in which he and his wife were held immediately following their defection to Australia. The photograph was presented as evidence to the Royal Commission on Espionage in 1954.

“…all writers of spy stories will have to invent entirely new types of characters, for Petrov is physically the most un-cloak-and-dagger-man you can imagine.” Ronald McKie, AM, 6/7/54

“In the days following his defection, Petrov was a bundle of nerves, too frightened to be alone even for a few minutes. For solace he took heavily to the bottle. In the evening under the influence, he would dream up heroic schemes to free his wife from the Embassy. By morning his resolve departed him and he retuned, in the words of the sardonic Safe House chronicler, to his usual uncourageous self.” Robert Manne, The Petrov Affair, 1987

“The Soviet Embassy in Canberra, whose doors we entered for the first time on 5th February 1951, was, to a unique degree among foreign embassies, a microcosm of its parent. It was a Soviet fortress on alien territory, a little Moscow on Australian soil.” The Petrovs, Empire of Fear, 1956

“The gates stood open during the day; postmen, telegraph boys, tradesmen and visitors came and went by the front entrance. But behind this undramatic façade was a mentality that was constantly on the defensive and maintained a barrier between ourselves and the town and people around us.” The Petrovs, Empire of Fear, 1956

“…for the vast majority, including myself, the motive of self-advancement was the first and chief incentive to membership of the Communist Party.” Vladimir Petrov, Empire of Fear, 1956

“I had an inside view of the great internal purges; I lived through the most fantastic reign of terror imposed by a modern government on its people, and a bloodbath almost too fearful to be believed. Those years can only be described as a nightmare, in the blind, inexplicable, capricious terror they unleashed.” Vladimir Petrov, Empire of Fear, 1956

The CODE NAME for Petrova: TAMARA (this was actually her sister’s name!)

The iconic object of the Petrov Affair is Mrs Petrov’s shoe. From the moment it was lost on the tarmac at Mascot Airport it became imbued with meaning. It is remembered by many Australians as the ‘Red Shoe’. Yet it is most unlikely the shoe was actually red. Its reputation as red almost certainly refers to its Communist origins. But the ‘Red Shoe’ is more than just a symbol of Communism on Australian soil. It represents a uniquely 1950s version of female identity. 1950s Australia read Mrs Petrov’s distress as much by her bare foot as by her anguished expression.