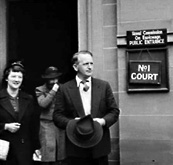 Betty Searle and Rupert Lockwood at the Royal Commission on Espionage, 1955.

1. Preparing a speech (testimony) which outlines, from your point of view:

3. You will be called when the Royal Commissioners are ready for you.

4. Be prepared to answer any questions from the Royal Commissioners especially about Soviet espionage in Australia.

In those days, in the coldest years of the Cold War, it seemed that there were some conformists who would persecute people who were left handed—they were so hostile to anything suggesting the Left. Rupert Lockwood in an interview with ABC journalist Tim Bowden, 1974.

Petrov was no quicksilver mind. He was a very slow thinker in the peasant style, and was like the peasants of Turgenev and Gogol’s Russia, drunken and shiftless. A Russian proverb says that ‘to be born an intellectual is to be born unhappy’. On that principle, Petrov should never have known a moment’s unhappiness in his whole life. Rupert Lockwood in an interview with ABC journalist Tim Bowden, 1974.

The Petrov image was soon to be blown by suggestions of seedy debauchery, of rutting expeditions at lively parties, of trafficking in duty free whisky from the embassy, and of financial standards approximating those of the General in the film Catch 22. Yet the Royal Royal Commissioners awarded him what we might call ‘The Order of the Cherry tree’. He could not tell a lie, he was a witness of truth. Rupert Lockwood, in an interview with ABC journalist Tim Bowden, 1974.

The media tried to bestow on Mrs Petrov all the innocence of the Garden of Eden in the pre-apple era. She was depicted as a woman of stainless ethical standards, a victim of the Soviet Union, rather than one who had deserted her country. Rupert Lockwood, in an interview with ABC journalist Tim Bowden, 1974.

The CODE NAMES for Lockwood: VORON or WARREN

Red: slang term for communist. Red was the main colour on the flags of many communist countries, symbolising the blood shed by workers in defending themselves against their oppressors.

The Communists are the most unscrupulous opponents of religion, of civilised government, of law and order, of national security…Communism in Australia is an alien and destructive pest. If elected, we shall outlaw it. Robert Menzies’ election campaign speech 1949 (extract)