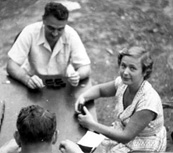 Evdokia Petrov playing dominoes with ASIO agents, including Ron Richards. Photograph presented as evidence to the Royal Commission on Espionage, 1954.

Their marriage in 1940 was one of convenience—he was a safe choice for her. She had been married before and her husband’s arrest and execution almost brought about her own.

“Under the floodlights of the airport I saw the milling crowd like a roaring sea around us. I lost my right shoe, and asked my escorts to get it back for me, but they would not stop.” Evdokia Petrova, Empire of Fear, 1956

“She was repulsed at the probability of being reduced to a penniless human struggling for existence, following a term of imprisonment in a Labour Camp. She had risen from obscurity to a position of authority; she had a social standing—she could hardly be expected to sacrifice all of her life. Her parents would understand the position. Later, however she exhibited pangs of conscience. The form it took effected every person at the Safe House.” ASIO Safe House Chronicler

“…the realization of the fate of her mother, sister and brother, struck hard at Mrs Petrov’s conscience. Her remorse knew few bounds, and in her own company her thoughts of them became nightmares…” ASIO Safe House Chronicler

“The Soviet Embassy in Canberra, whose doors we entered for the first time on 5th February 1951, was, to a unique degree among foreign embassies, a microcosm of its parent. It was a Soviet fortress on alien territory, a little Moscow on Australian soil.” The Petrovs, Empire of Fear, 1956

“The gates stood open during the day; postmen, telegraph boys, tradesmen and visitors came and went by the front entrance. But behind this undramatic façade was a mentality that was constantly on the defensive and maintained a barrier between ourselves and the town and people around us.” The Petrovs, Empire of Fear, 1956

“No one can even begin to understand how people think and behave in the Soviet Union until he grasps this perpetual obsession with lurking enemies, internal and external alike.” Evdokia Petrova, Empire of Fear, 1956

The CODE NAME for Petrova: TAMARA (this was actually her sister’s name!)

The iconic object of the Petrov Affair is Mrs Petrov’s shoe. From the moment it was lost on the tarmac at Mascot Airport it became imbued with meaning. It is remembered by many Australians as the ‘Red Shoe’. Yet it is most unlikely the shoe was actually red. Its reputation as red almost certainly refers to its Communist origins. But the ‘Red Shoe’ is more than just a symbol of Communism on Australian soil. It represents a uniquely 1950s version of female identity. 1950s Australia read Mrs Petrov’s distress as much by her bare foot as by her anguished expression.